Last week, I met a gal that ran Boston this year and is passionate about CrossFit AND lives near me (for a few more months anyway). She attends a different box than I do and I promised to give it a go. I waited patiently for Sears to call me and let me know when they would deliver my mattress and when they did not, I went ahead and told Lauren that I would see her at 9am for the public workout and stick around to do the members workout at 1030am.

Walked into this colorful patchwork of carpet underneath a massive pullup/wallball/ring/rope climb area. Now I love the mix-matched patterns and colors but carpet in a box?? how disgusting do you think it is? Maybe they steam clean it once a week?

They have a surplus of equipment and space which is always a plus.

Free workout with a partner. Both people run 600m but the rest is split up between you and your buddy however necessary. While one buddy does their part of work, the other jogs in place until it is their turn to do some work. 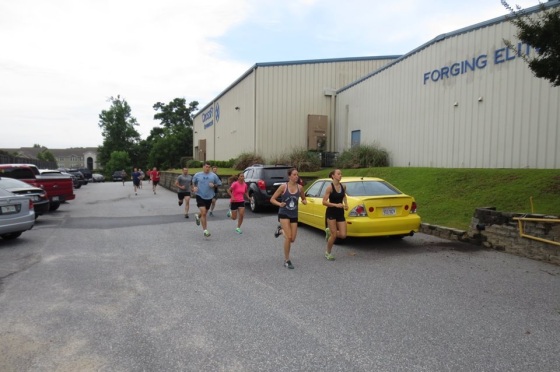 We were quite speedy as we knocked out 600m leading the pack here.

That’s me doing hand release pushups and Lauren has her hands on her hips jogging in place. We worked our way through the workout the only snag for us was the knees to elbows. We were slow as molasses in an Alaskan January through those.

That’s Lauren carrying me. She carried me the whole 200m around the building because she just felt bad about me carrying her. Sweat was running down my chin onto her. I felt bad. haha. We made a great team. Second done with a time of 14 minutes and change.

These are the guys that beat us. I have no idea what has our attention in the background, but you can see the size and organization of the box along the back wall.

It was a good turnout. I was dying to see what the regular members wod would bring.

oh. well shit. I guess I’m gonna have to carry Lauren after all. Rope climb… yeah no problem, I’ve only climbed one like 2x before and both resulted in serious burns.

I have no pictures to prove that Lauren and I survived this workout, but I did carry her some of the 800 total meters and I conquered my fear of the rope without severe burns (each of us climbed a total of 4 times). We had fun and kept one another moving quite well. It took us 21:19 and I felt amazing and exhausted at the same time. I was glad Lauren invited and encouraged me to come it

Afterwards, Lauren introduced me to two coaches and they told me a little bit about the gym. One of them left the family of boxes I am currently affiliated with for that one and explained why. The other coach was the owner and explained his programming philosophy and some of the available opportunities there. They offer an Olympic Lifting class 3 days a week  AND a power lifting class 3 days a week for no additional charge. The gym itself is open from 5a-830p most days with a half day on Saturday and closed on Sunday. Plus it’s cheaper. I think I have found myself a new home. The owner is very much a no BS kind of coach. I observed him watching people like a hawk. While he does not take the time to applaud you for your efforts, this allows him to see more. I appreciate that. That’s they type of coaching that I respond best to. So come August (after finishing up a training commitment to my partner for a competition), I will be a member of CrossFit Deprivation to see where that may take me (and my husband since we are a package deal).

I made it home mere moments before the Sears delivery time came by to drop off our new Mattress! It’s our first bed as husband and wife and supposedly it makes us “real adults”. (previously we were sleeping on an air mattress). Now, it will still be a month before both of us are in that apt together and until then, it will not be slept in. It will just sit pretty. 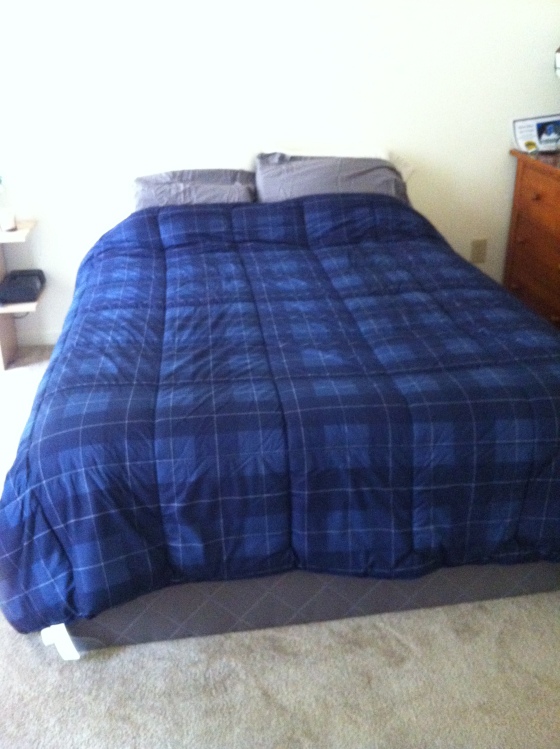 new sheets, new comforter, new bed… haha. you can’t see the 2 pillow cases that are ivory in the back