I really don’t expect people to read this small novel…. I guess I had more to say about this than I had originally thought.

-5am wakeup (&check weather) and tell James “happy birthday”
-Breakfast: cinnamon raisin bagel with peanut butter
-6am Jessie arrives and Roxanne practically beats her with enthusiasm
-605ish we pile into the car and begin the 2hr roadtrip… James & Rachel, Paul & myself, and Miss Jessie.
-Two hour later as we near our destination, the ladies in the car are practically jumping up and down having to pee so James pulls over at this tiny gas station that happened to have impressively clean restrooms. I attacked James with a pink swimming noodle.

Moments before we got out of the car to start the race… Jessie, Me, Paul

Okay, so now we’re at the race and it’s time to pick up our packet. Jessie and I were foolish enough to not bring a rain jacket, umbrella, or poncho. James sent us back to the car to sit. I protested for about 15 seconds but decided that was stupid. So we took the opportunity to stay dry and warm. Eventually, it was time to start the race. We all head over to where the pavilion is to wait since they aren’t done handing out packets. Thank God they weren’t. James and Rachel seemed content in their trash bag ponchos… Jessie and I kept giving James shit since he didn’t INSIST we wear a trash bag. Finally, Jessie walked over to the picnic table and got 2 industrial garbage bags. They were like dresses on us. I was instantly warmer. Soon, it became a fashion trend and many other people joined in on the fashion statement.

My plan was to walk one/run one since Jessie has an injured back and I have a pissed off calf. Not to mention Jessie hasn’t been running and somehow convinced herself to participate days before. I had no way to check distance and didn’t wanna overdo it, so we decided we would do something with 5min rotations.  I knew Paul and Rachel would be waiting for us at the finishline and then we would all wait patiently for James to finish his 50k.

-BANG! **too late to back down, lets do this… if james can do 50k I can do 13.1mi**
-It’s a slow start since we walk for the first 10 minutes. We are 6th and 7th to last.
-“Man, I sure am glad that I wore this trash bag”…. **Holy shit, did I really just say that?**
-**I don’t think I can run.** watch says 10:06 “oh crap! We’re supposed to be running”
-**I’M RUNNING**
-We make it to about 30:00 before we get on a single track and get behind several people doing a slow but steady jog and I check with Jessie to ensure she’s okay with it. We pass the group and keep on our merry way. As we continue and pass others, I make it a personal goal to stay ahead of them.
-We keep chugging along despite the constant slant that keeps our left leg cramped up a little and our right leg reaching… The trails were slick and despite the warning signs (other people’s sliding marks) I still found myself shrieking as I slipped.
-Jessie informs me that she doesn’t know how I haven’t broke an ankle since she’s running behind me and sees how much I’m almost rolling them. (I learned a while ago to keep my ankles relaxed)
-**Jayme, you need to walk. I know you’re excited that you’re running, but Jessie is just returning to fitness… don’t kill her** So I slow to a walk “Oh thank God” she exclaimed
-The walking/running/hill war begins around an hour and a half of moving for us.
-I fall twice, but don’t stop to think about it. I’m a bit bummed that I squished half my water out though.
-I look at the watch and see that it says 1:50 I remember that time vividly because that’s when Jessie started to suffer. She was tired.
-We hit an open field that is riddled with mushy mud puddles. I finally just gave up and trudged through them.
-Time seemed to slow…. we walked for 10 minutes… jogged for a couple… then walked… “If I thought it was shorter going back the other way, I wouldn’t think twice to go back to the start” she told me “How much farther do you think we have left” she asked…. “At best we have completed 9 miles”…. “F*********************ck. We still have so far to go. You can run ahead of me” (that’s not the first time she said that by this point in the race, but I didn’t wanna be THAT friend…..)
-We hit pavement and I saw an aid station up ahead so we jogged on over to it. I asked them how much was left and they told me they were 9.25mi into the race…. (2:07 read on the watch)
-I walk with her for probably 15 or so additional minutes before she’s told me so many times to run ahead that I realize she would be more miserable thinking she held me back. So I took off.
-I ran for all the times I haven’t recently because of my calf. I ran to get warm. I ran to celebrate running. I ran to celebrate life, rain, friendship, family, and love. I just cut loose as best I could with a modified stride due to the injury. Most of all, I ran to get done so that I could go back and finish with her. That way I’m only half a shitty friend.
-I hit the final mile (on pavement) almost 2:43. I finished hardly aware of what time was on the clock… was tearing the chip off of my shoe, rushing over to my husband to give him my water and medal, and Rachel and I took off (running) to get back to Jessie.
-We caught up with her where she had just under a mile to go and walked and ran with her to the finish of her first half, on a sloppy trail, in the cold, wearing a trashbag, without training…. We are all so proud. 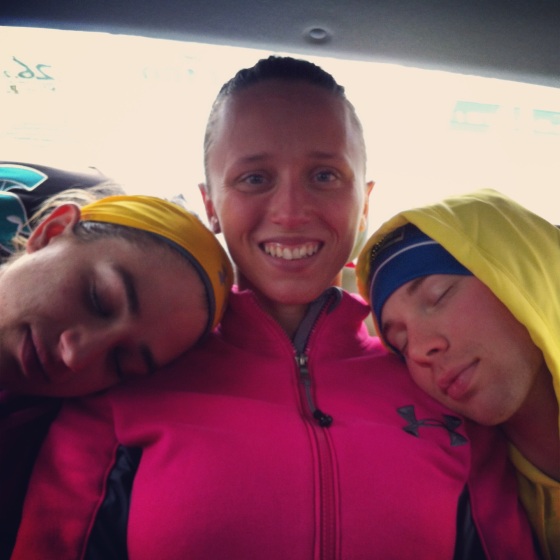 Jessie and Paul were ready for a nap after they finished but I was wired.

Then it was time to eat, change into dry clothes, and wait for James. He was predicting something around 5hrs. I told him it was flat (to him) and expected him at 4:30…. Paul made his way up the hill to check and see if any 50k folks had finished while the gals took a few more moments to get out of the warm, dry car. By time we made it up the hill to wait for James, he was sitting down. Well shit. We all missed him finish the race! Great birthday present, right?! Well, Paul got to see James finish though and thanks to his quick photo, you can all witness his finish like I did! 🙂

Paul got 3rd in his age group and a 2:08 time. It’s the first half he ran for himself, 2nd half ever but the first one he ran with me. Rachel finished 4 minutes ahead of me in what sounds like was one epic mile for her keeping the man behind her (it’s always a vendetta against the nearest joe schmo at the end). My official time was 2:50:12. Jessie managed to reel in a 3:07…James finished with 4:25 in second place overall (I knew it!!!! I knew he had it in him)

the wooden finisher award! we all took the green and white ribbon as a good omen for Spartans in the Big 10 Tournament

James fast changed after grabbing a root beer and we headed into Cookeville, TN to meet up with 4 other friends at Buffalo Wild Wings to watch Michigan State beat Michigan. I told the server it was his birthday. They make an announcement, give you a hat, and then you get dessert, beer, or a sauce. James kept apologizing to Jessie because apparently he felt like he was holding her captive watching the ballgame. Meanwhile, I witnessed first hand the degree to which her ADD was kicking in watching all the different sports games. haha.

We went home and celebrated life with the remainder of the banana pudding from the night before.

March 16 was about more than James’ date of birth this year.  It was about people reaching out and exceeding their own expectations. Overcoming the blocks the mind puts up saying that the body is done… It was about pushing yourself a little faster just to ensure that the Oak Ridge boys represented with a 1&2 finish in the 50k.  It was about bonus miles for support and love. It was about struggle and overcoming… It was about putting one foot in front of the weather despite being wet and cold… It was about breathing in fresh air and allowing the rain to wash away stress and negativity. I walked away inspired by those around me, especially Miss Jessie.

Most importantly it was about those amazing men that make up the MICHIGAN STATE SPARTANS…. 😉 Go Green! (bet you can’t guess who we’re rooting for!?)