I’m beyond apologizing for being a terrible blogger… I got obsessed with a trilogy (Wayfarer Redemption trilogy), then The Book Thief, and now I’m completely obsessed with the House of Night series. When that happens, any and every minute I have extra is fully devoted to allowing myself to be completely entranced by the words on the page and engulfed into the world the author describes. It’s an addiction. 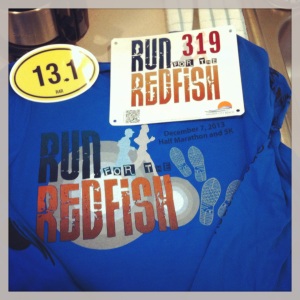 Let’s catch up real quick… I work. Paul was in air assault school for 12 days which required me to literally do everything during that time (including taking Roxanne to puppy classes). I read books. I drank water. and I cooked food (ate it too!). I have been faithful to CrossFit.  I went to drill this past weekend and embarrassed myself a few times as well as impressing several people outside of the medic room (opening up the opportunity to finally do some things that I will explain soon). VOILA. We’re almost caught up. Allow me to review the race weekend from Dec 6-8 in Panama City Beach to complete the catch up! 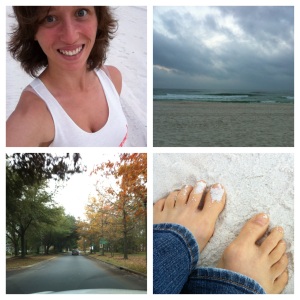 Since Paul was in air assault school, I had to go alone. I was less than thrilled. I left Friday morning after I got off from work at 8am and picked up my packet around noon thirty. I tracked down my hotel room and was fortunate enough to be allowed in. I ate lunch I brought with me and then took a two hour nap. After I woke up, I looked up to see what I’m calling fake blood form Halloween…. that was nice. anyway, For dinner, I walked down the beach a little ways to a place called Sharkey’s. My food experience was less than amazing (I ordered a medium bacon cheeseburger with fries), but my server was very kind and amusing so that made it slightly more enjoyable. I went to bed early-ish and woke up at 6. The race started at 8. It  was drizzly outside and just yucky for beach weather, but I thought it might be perfect for a half-marathon. I chose to wear a skirt for my first time since this was an adventure all it’s own. I made my way down to Margaritaville where the race afterparty would be and the start point was. 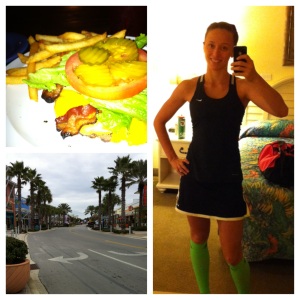 I’m not gonna lie, it’s a completely different mental preparation game when you are the one responsible for getting there, finding the start, getting yourself ready to run, and giving yourself the good luck pep talk. It was odd to watch others around me getting their hugs and kisses and high fives. I just smiled and absorbed the uneasy enthusiasm that a race environment contains. I talked with one woman named Beth for several minutes before the race, she was looking to get better than 1:55.

There was a countdown and a “GO”… I was like “WTF?!?” as I walked quickly (no room to run at first) towards the start. My game plan was to run every step, to enjoy the race, and to finish. That’s it. A no pressure type situation for me. No music. No watch. Just the road and me (and a few hundred other people)

Miles 0-2 “pace it Jayme, we are not here to race”…. “ooooh. That girl stay near her”…. “water station at mi1? what the heck, don’t mind if I do”…. “damnit! How did I miss that this is an out and back! I hate out and backs”
Mile 3 “yay water”… as I proceed to try and run while drinking, I decide to walk through water stations. “only 3.55mi more against the wind…. no biggie. “…. I remember smiling at people, reading signs… I was really trying to enjoy life… “does this very slight grade ever end?”
Mi 4 “yay water” “that girl looks solid and is getting farther away!!! must. speed. up…. NO wait. I need to bide my time. I know this game…. grrrrr”…. (GU1 at mi 4.5ish)
Mi 5 “holy shiitake mushroom… here come the elite runners. I always find myself envying them more on out and back courses.” “oooh. water… every mile…. this is fantastic.”
Mi 6 I see Beth and shout some encouraging words to her because she’s killin’ it…. “why are the people with camel baks stopping at water stations”  ONLY .55 UNTIL I RUN WIIIIIIIIIIIIITH THE WIND (I’m distracted waving to the people that have turned around and then those that haven’t once I have)
Mi 7 “wait one cotton pickin’ second…. how in the hell am I still running against the wind”… “maybe it’s just this spot between the super tall hotels….” “God hates me today. I will be running the other 6.1 miles of this stupid race against the wind”
Mi 8 “why does it feel like I’m running uphill both ways? Is this what incredibly flat land feels like?!” “eff you wind” “focus on the pretty waves to my right…. I’m lucky to be out here” (that last thought held me over and before I knew it, I was at mi 9)
Mi 9 “wow! that mile went by fast!” “do I try and pick her off now?”… “gah. it’s humid. no wonder they have water at every mile marker” (GU2)
Mi 10 “5k to go!!!!!!” “om nom nom. I love water”… I picked “her” off at this point without effort. I just stayed in cruise and as many know, those that didn’t cruise start falling out. Makes us cruisers feel accomplished. haha. “eff emmm ellll… I am tired of this wind”
Mi 11 “oh. hell. no. that gal is NOT staying ahead of me. She looks like she’s falling apart. I’m just gonna have to shuffle better”… “weird. it only took 11mi+ for me to be thankful for the wind in general”
Mi 12 “only 1.1 left. Let’s release some of the reserve tank. and sprint the last tenth to the finish”…. “I cannot believe I thought running a marathon was a good idea. Anything beyond a half marathon is just crazy….”
Mi 13 “all by myself… I did this. I have support, but something about this race… it’s mine. all mine……” squints for the clock…. “OH! I can beat 2:05…. sprint faster legs don’t act like you’ve ran 13 miles!” 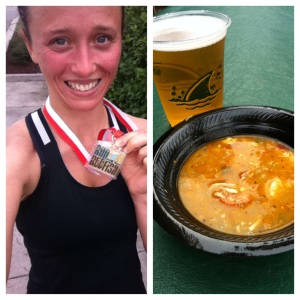 I collected my medal and then marched straight over to Margaritaville to collect my free gumbo and Landshark. Om nom nom nom.

I had no one to call. Paul wouldn’t be available until that evening. But I updated facebook! I ran into my “friend” from the soldier’s marathon. He found me at the afterparty. We’re now facebook friends. I learned that even when you are alone at a race, you are actually not alone. Open your eyes and your smile… the world is your oyster. Really and truly.

I spent several hours Christmas shopping for some of those closest to me. Had ice cream, Starbucks, enjoyed me some sunshine and sand… then headed back to the hotel for a shower and a nap. The Spartans were playing Ohio State that night and it was a huge deal. My goal was to watch it at Beef O’Brady’s.

I wrapped up the ultimate cheat day that night when I ate my southwest chicken wrap with onion rings while I watched the Spartans manhandle the Buckeyes.  I was beat though and had to leave at halftime and go to bed. I woke up early the next morning and said goodbye to the ocean.  All in all, I learned even more about myself and returned home in great spirits. 3 states down, 47 to go.

Official time was 2:04:41 my second fastest out of four half marathons. 🙂 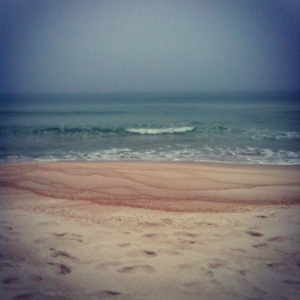 5 thoughts on “Run For the Redfish Race Review”